If you’ve played Warframe during the past couple weeks, you may have heard a mysterious new voice, transmitted from your Orbiter’s Scanner, suddenly talking a lot of conspiratory… sense.

“To all of you driftin’ out there in the black, mark the frequency. The time has come to act together. To open our eyes and gaze with utmost clarity past the present and into a future we create. Shoulder-to-shoulder. Mark the frequency.” — Nora Night

The voice is Nora Night, and the radio frequency is Nightwave, the new game update we’re delivering today across all platforms. This simultaneous multiplatform content update is a first for the Warframe team, so we’re incredibly proud and excited to offer it to you today for free!

Nightwave is Nora Night’s all-new ongoing radio broadcast. Her conscience-burning questioning of the ‘System’ and poetic monologues about life in the Origin System play out like a kind of radio drama series.

Nora’s stories consist of Series and Episodes. Think of a Series as a season with a beginning, middle and end, with earnable exclusive rewards specifically tied to each one.

In each Series, you’ll play through a number of Episodes, each one coming out every two weeks or so, across a roughly 10-week period. The first Series, “The Wolf of Saturn Six,” tells the story of a savage and unruly convict who has escaped from captivity. Now he’s out there, freely prowling the Origin System, and you, dear Tenno, must put an end to it!

Here is where it gets more nitty-gritty. Nora offers daily and weekly challenges, called Acts; as you complete an individual Act, you’ll earn Standing with her, similar to the way you earned Standing with other Syndicates in Warframe. The more Standing you earn, the better Reward Tiers you unlock. Make sure to complete all 30 Tiers before the Series is over to earn all rewards! 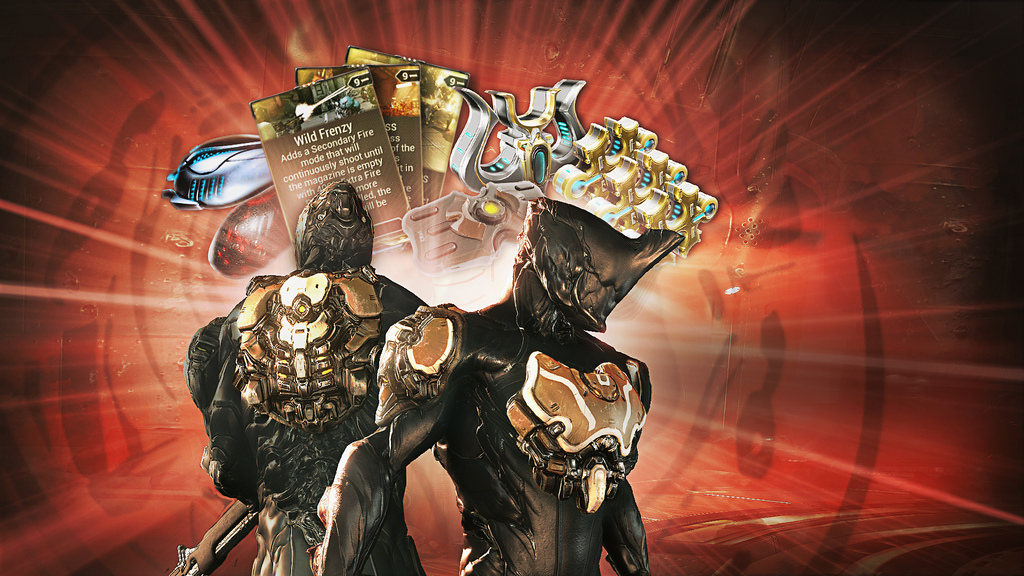 Some of the power items you earn have never, ever been available before, so this is an incredibly opportune time to jump into Warframe and earn these exclusive items.

Rewards range from exclusive Cosmetics, such as Armour, Sigils and a Syandana to exclusive and highly sought-after Power items such as a Warframe slot, Umbra Forma, Forma Bundles, Weapon Slots, Orokin Catalysts, and a lot more. 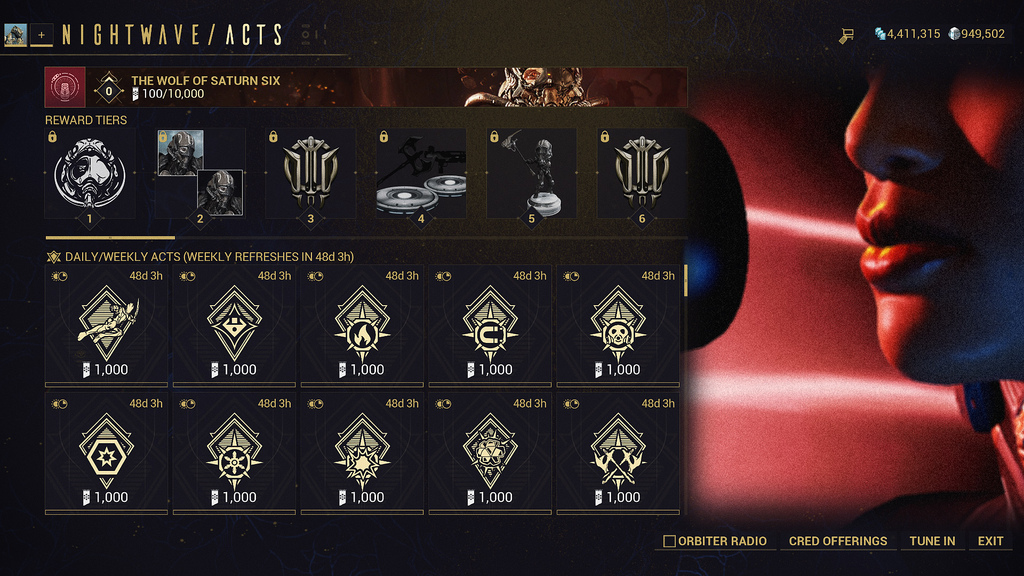 Some Tiers contain items called Wolf Cred, a new token currency. These can be used in Nightwave Cred Offerings, a shop that rotates through the former Alert System rewards you want the most. Wolf Creds must be redeemed before the Series is over or sold for credits, so use them before the frequency is lost.

But take note! Once the Series ends, it’s done. There is a very real immediacy to each one!

If you play, you’ll get as much Power and Cosmetic goodies as you can earn. Nora will then commence on a whole new Series, with its own distinct set of characters, story, lore, incentives and rewards.

All of this is happening today across all platforms!

If you haven’t already heard her musings from your Transmitter yet, we encourage you to log in and listen on your PS4. Not only is it cool to hear Nora’s warm, commanding, velvety voice in the chamber of your Orbiter, but she will continue to bring new stories, gameplay, and rewards from the Origin System, directly to you in the future!

“Acts of defiance, acts of generosity, acts of sacrifice… this is how we turn this system ’round. I’ll take you there, Dreamers. I’ll bring you back.” — Nora Night