Strap on a jetpack and enter the competitive PS VR arena of Space Junkies, out 26th March

Hello, I’m Adrian Lacey, Producer of Space Junkies, and part of the development team based in Montpellier, France. We’re incredibly happy to announce that Space Junkies, a fast-paced and jetpack-fueled multiplayer VR joyride in micro-gravity is coming to PS VR!

We are very excited to be talking to our PSVR players and would like to give you an overview of what you can expect from Space Junkies, launching on 26th March.

In Space Junkies, you navigate around deadly orbital arenas, grab insane weapons and face off against enemy players in intense duels or treacherous free-for-alls solo, or you can team up with a partner in 2v2 battles.

Space Junkies is an FPS designed from the ground-up to take advantage of all the wonders Virtual Reality can offer. Just as for many players, VR has been a new learning experience for the team. What struck us initially when testing Virtual Reality was the level of immersiveness it allowed.

We decided that we needed a strong navigation system that should allow the player to fully take advantage of 360° of freedom and the new spherical spaces that VR provides. The maneuverability and overall fun-factor of the jetpack made it our top choice.

We think of our maps as true spherical battlefields. In order to maximize verticality and make the best of this new battlespace, all maps are developed through our unique, custom-made, VR editor.

Navigating in Space Junkies grants the player a great deal of freedom of movement and strategy on how they decide to approach different situations. For example, do I fly straight into the action? Do I play more tactically using covers to sneak from below or above and surprise the enemy? Or should I maybe stake higher ground and cover my teammate while he goes in? VR adds a whole new dimension in terms of situational awareness and is a real game-changer for the FPS genre. You will need to keep your wits about you as contact can come hard and fast from any direction!

Working with Virtual Reality allowed us to add a real sense of presence for the players. Space Junkies utilizes 3D-localized audio, which will help you hear and locate both your enemies and teammates. Before entering a game, players meet together in the lobby and have the opportunity to share tricks and work on their strategy with teammates before getting into the Orbital Arenas. In 2 vs 2 battles, you play better when you work together, so communication and strategy are key. Whether you’re hunting an enemy with your teammate as a wingman or using him as bait to set-up ambushes, working together will always give you an edge on the battlefield.

A sci-fi spin on classic weapons

To achieve victory in Space Junkies you’ll need some powerful gear, but not to worry, you’ll find plenty of weapons to pick up throughout the battle arenas. Grab the Cosmic Ripper or minigun and start tearing through enemy lines with its powerful suppressive fire, or switch to the Plasma Sniper Rifle and begin dispensing headshots at long range. In the unlikely event the enemy team is still standing after that, draw the Biopump shotgun and get up close and personal to finish them off!

Working with the Dualshock controller allowed us to provide a mix of both one-handed and two-handed weapons. All players can equip up to two weapons, and one-handed weapons can even be dual-wielded if you want to get some of that space gun-slinging action.

It does not stop with weapons, though. When spawning, players have the opportunity to enter their armoury and pick two pieces of equipment that can be the difference between life and death in the heat of battle. These include a Solar Sword to slice and dice your enemies if they get too close. A shield that can protect you from any direction, and my personal favourite, the Lure, exploding decoys that reproduce your every movement to trick stalking enemies (oh, and they explode when they get too close!)

Characters themselves also provide a great deal of diversity. Before entering a match, players choose between a variety of space characters and some bizarre alien lifeforms. Each one offers distinct gameplay advantages in terms of speed and resistance. 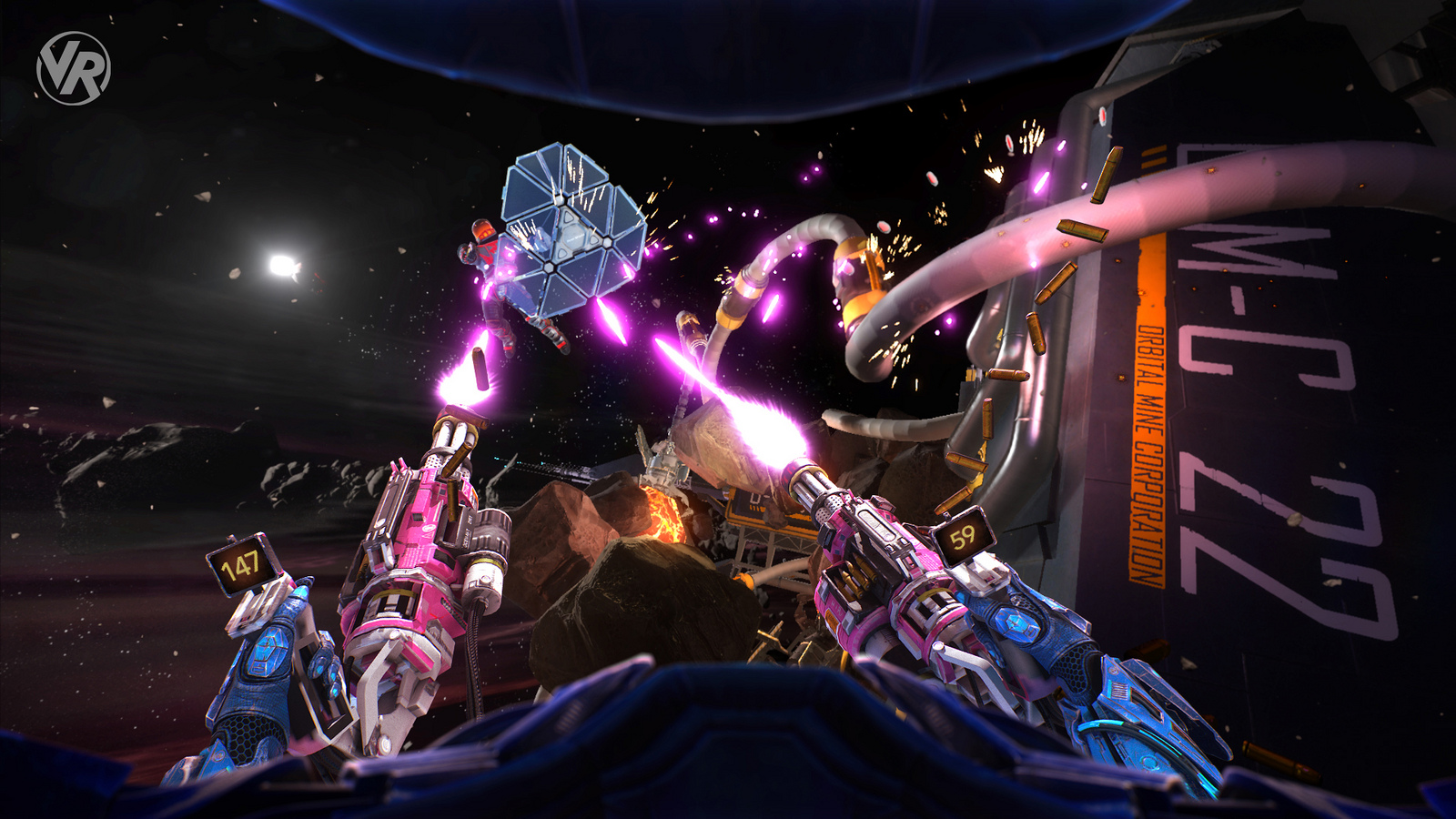 Between all the available weapons, equipment and characters, you are free to build your own loadout that fits your playstyle. Whether you like to be a fast and sneaky flanker, a beefy tank that goes all-in behind his shield, or a careful sniper armed with patience to shoot from a safe distance, there’s something for all types of players.

Combining weapons and equipment will help you in battle, but watch out – there is limited ammunition, so once it’s spent your weapon will turn into a grenade and explode!

At the launch of Space Junkies, there will be 7 weapons, 6 specialised pieces of equipment and 5 characters with more coming down the line!

We hope you’re as excited as we are to have Space Junkies available on PS VR. The game will release on 26th March, but in the meantime keep an eye out for more news and details about Space Junkies, including the dates for our upcoming open beta!

The post Strap on a jetpack and enter the competitive PS VR arena of Space Junkies, out 26th March appeared first on PlayStation.Blog.Europe.