A city under siege from the undead. Two heroes looking for a way out. 20 years later, the survival horror masterpiece is reborn in Resident Evil 2, out now for PlayStation 4!

For PlayStation fans the world over, it goes without saying that without PlayStation, there would be no Resident Evil. Following-up on the survival horror precedents set by the original game, Resident Evil 2 upped the ante – and the horror – by bringing the terrifying monsters and shambling undead down from the Arklay Mountains to the streets of Raccoon City, helping to bring the sense of fear and survival a bit closer to home thanks to the power of the PlayStation. The original Resident Evil 2 is synonymous with PlayStation for a tonne of fans, and even the reveal of the game at E3 2018 featured a PlayStation controller as a nod to where the series began!

Technology has certainly changed over the years since the original game made its debut on PlayStation back in 1998. Chunky CRT televisions have been replaced by smooth flat screens, while the pre-rendered backgrounds and polygonal character models of yesteryear have been upgraded to detailed environments and scans of real people to create the in-game characters – and even some zombies!

With all this in mind, the team behind Resident Evil 2 aimed to create an experience that would not replace those memories of playing with the lights off by the glow of an old TV, but rather enhance the experience and give everyone, from newcomers to veterans, a way to experience the events of RE2 in a brand new light while retaining what made the original so special. 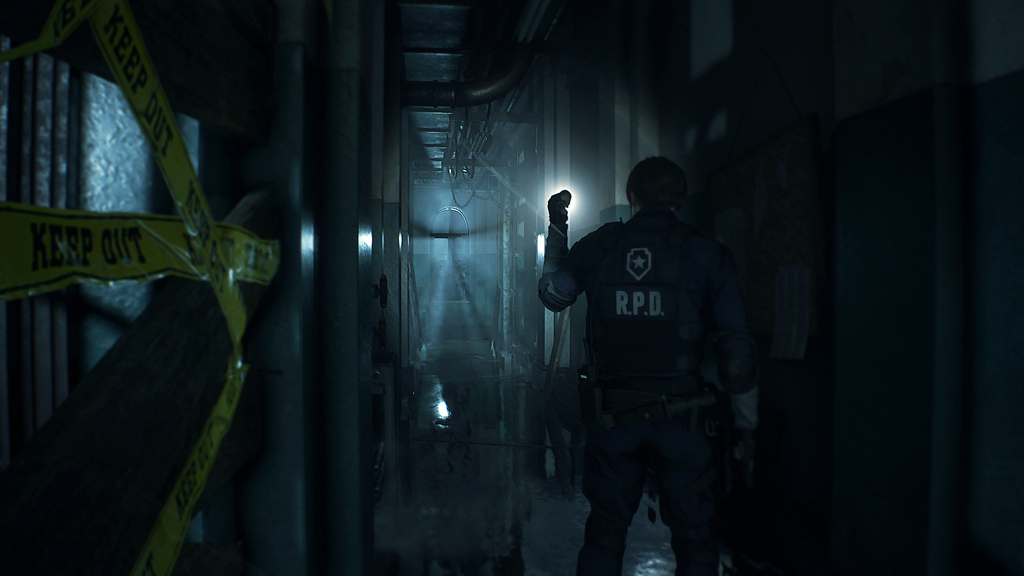 From the desolate streets of Raccoon City to the iconic R.P.D. station, heroes Claire and Leon will have their work cut out for them if they want to survive the city of the dead. Joining them are fan-favorite characters who were introduced in the original Resident Evil 2, including the mysterious Ada Wong, a woman shrouded in mystery looking for the truth behind the outbreak, and Sherry Birkin, a young girl separated from her parents and being chased by a mutated monster. Who you choose will impact how you play and experience the events of Resident Evil 2 as well!

No matter who you play, you’ll have to contend with some tough creatures… but the terrifying Tyrant, a monster specifically designed to crush you into paste, will put your survival skills to the test.

Sometimes referred to as “Mr. X,” this nightmare in a trench coat will stop at nothing to chase you down, following you from room to room and leaving you with a constant sense of unease. Fans will remember him crashing through walls and showing up at the worst times in the original game, but the Tyrant has a number of new tricks up his (giant) sleeves.

Yasuhiro Anpo, Director for RE2, was kind enough to answer a few questions about this iconic enemy: 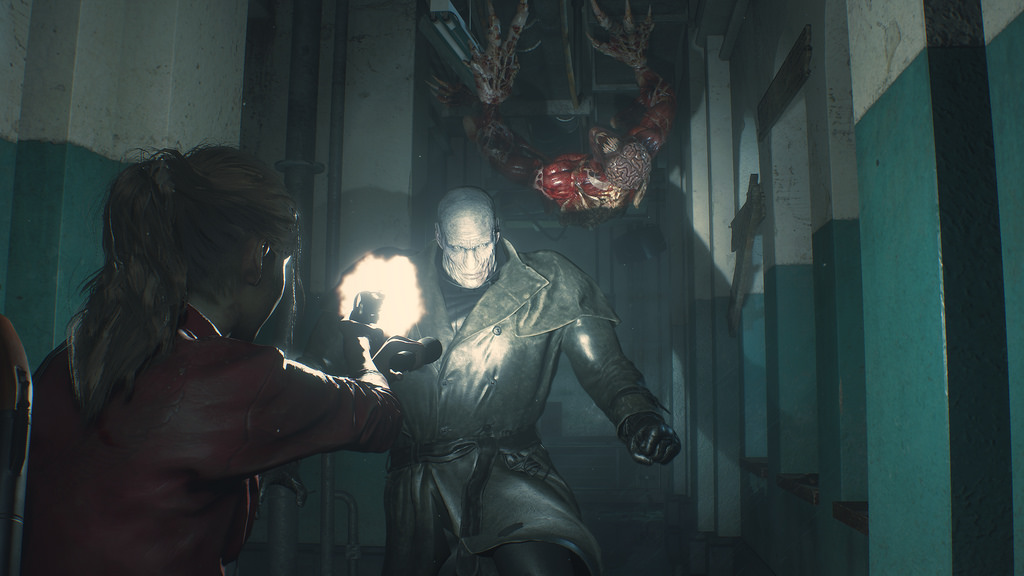 Some fans know him by “Mr. X,” some know him by “Tyrant.” Can you explain what the official name is for this enemy, and offer any insight into why he’s been referred to as “Mr. X”?

His official name is “Tyrant,” and is one of Umbrella’s mass-production models. The reason he was also referred to as “Mr. X” was because there weren’t many details disclosed about him, even in the original title. This was done on purpose, since we felt that it would be far more terrifying to be chased around by a large man with no rhyme or reason or explanation why. Providing the player with too much information would only lessen the mystery and fear of the unknown, so we kept things shrouded in darkness.

What are the main differences between the Tyrant as he appears in Resident Evil 2 compared to the original?

In an attempt to blend in better into everyday society, the new Tyrant fits himself with a hat and coat for some level of camouflage. In addition to that, the coat is equipped with a higher level of durability to further deflect incoming attacks.

Tyrant appears to stalk players for longer periods, and his attacks and movement speed have been updated. How do Tyrant’s behaviors vary from the original RE2?

The main thing is that the Tyrant’s objective has changed. In the original title, the Tyrant only appeared in Scenario B, since its main goal was to capture Sherry’s pendant. However, in order to up the ante and instill an extra level of fear into its existence, we changed the Tyrant’s objective to be the obliteration of any evidence leading to Umbrella, including the eradication of any and all lifeforms still remaining within the vicinity. To make matters even more intense, once it finds a target, it follows after them in an endless pursuit until that target is dead. Even if you’re in the room next door, if you make a sound, the Tyrant will track you and hunt you down.

If Tyrant’s function is to be able to blend into society to complete missions for Umbrella, do you think this would be effective in the real world?

It might be effective from far away … maybe. You can’t hide the fact that the Tyrant is still a large, hulking figure. There’s probably no chance that its camouflage would work up close. If any children were in the vicinity, I’m sure they would be horribly intimidated and immediately burst into tears.

What are your recommendations for players who are encountering Tyrant for the first time and want to try to fight back?

If you hear its footsteps, then I’d say run like hell! I recommend also knowing your surroundings and constantly knowing what your escape routes are. Nothing spells out imminent doom like being trapped in a corner with no place to hide. 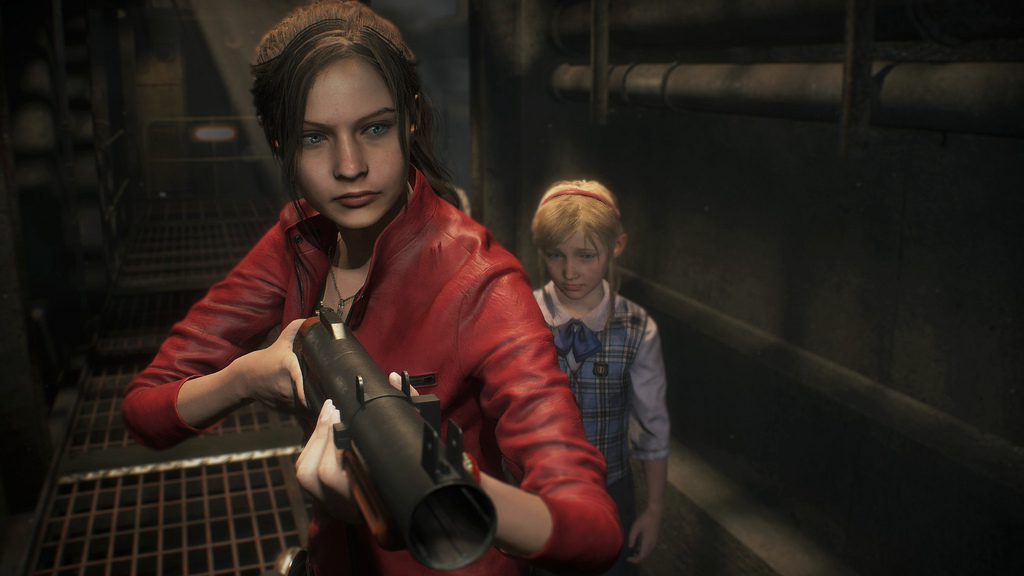 Again, thanks to Resident Evil 2 Director Yasuhiro Anpo for answering those questions!

There’s plenty more to do in Raccoon City outside of the main campaigns, too. Alongside a special “2nd Run” Mode that showcases an alternate series of events that unlocks when you complete a character’s story, there are a couple of unlockable bonus modes awaiting those who are up to the challenge! The 4th Survivor places players in the boots of Umbrella agent HUNK as he battles his way out of the sewers beneath Raccoon City, while The Tofu Survivor offers an even more extreme challenge – fight your way out as a block of Tofu armed only with a knife!

Ready to make the trip to Raccoon City? Survive in style with the Deluxe Edition of the game, which comes with additional costumes for Claire and Leon, a bonus weapon skin, and a soundtrack swap which replaces the game’s music with tracks and sounds from the original game! No matter how you play, you, too, can once again enter the world of survival horror with Resident Evil 2, out now for PlayStation 4.