Who among us has never wanted a superpower? In Rage 2, your lifelong dream of heroic powers will finally be fulfilled. You’ll experience what it’s like to be a real wasteland superhero when Rage 2 launches on PlayStation 4 on 14th May. But for now, get a taste of that R-rated superhero life that you’ve previously only seen in short-lived Netflix originals with this brand-new trailer.

You’ve got the power(s)

Not all heroes wear capes. Some wear super high-tech body armour and decorate themselves in the blood and entrails of their enemies. (Trust us, you’re not pulling off a Slam from high altitude without getting some person-paste on your shoes.) But what kinds of powers are in a wasteland superhero’s arsenal?

“We went through a number of iterations to ensure that we got abilities that complement and synergize with the weapons, not replace them,” explains Lead Combat Designer Peter Johansson. “In the spirit of id-style combat, we wanted abilities that support the aggressive, push forward, close- to mid-range combat we are creating. The key to survival in Rage 2 is to get up in your enemies’ faces, and the abilities are designed as tools to encourage that.”

Rain destruction from above with Slam, a devastating ground-pound attack. The effectiveness of Slam is based on height; the higher up you are, the more powerful the Slam. Grab some air with a double-jump and smash your enemies into a chunky red paste.

When you absolutely need to get people out of your face, hit them with Shatter, a lethal kinetic blast that forces enemies away from you and sometimes just outright makes their heads explode.

Vortex lets you pull your enemies out of their comfort zone. Aim and toss Vortex near a crowd of enemies to yank them all toward one spot, leaving them primed for a well-timed grenade, rocket or other area-based attack. 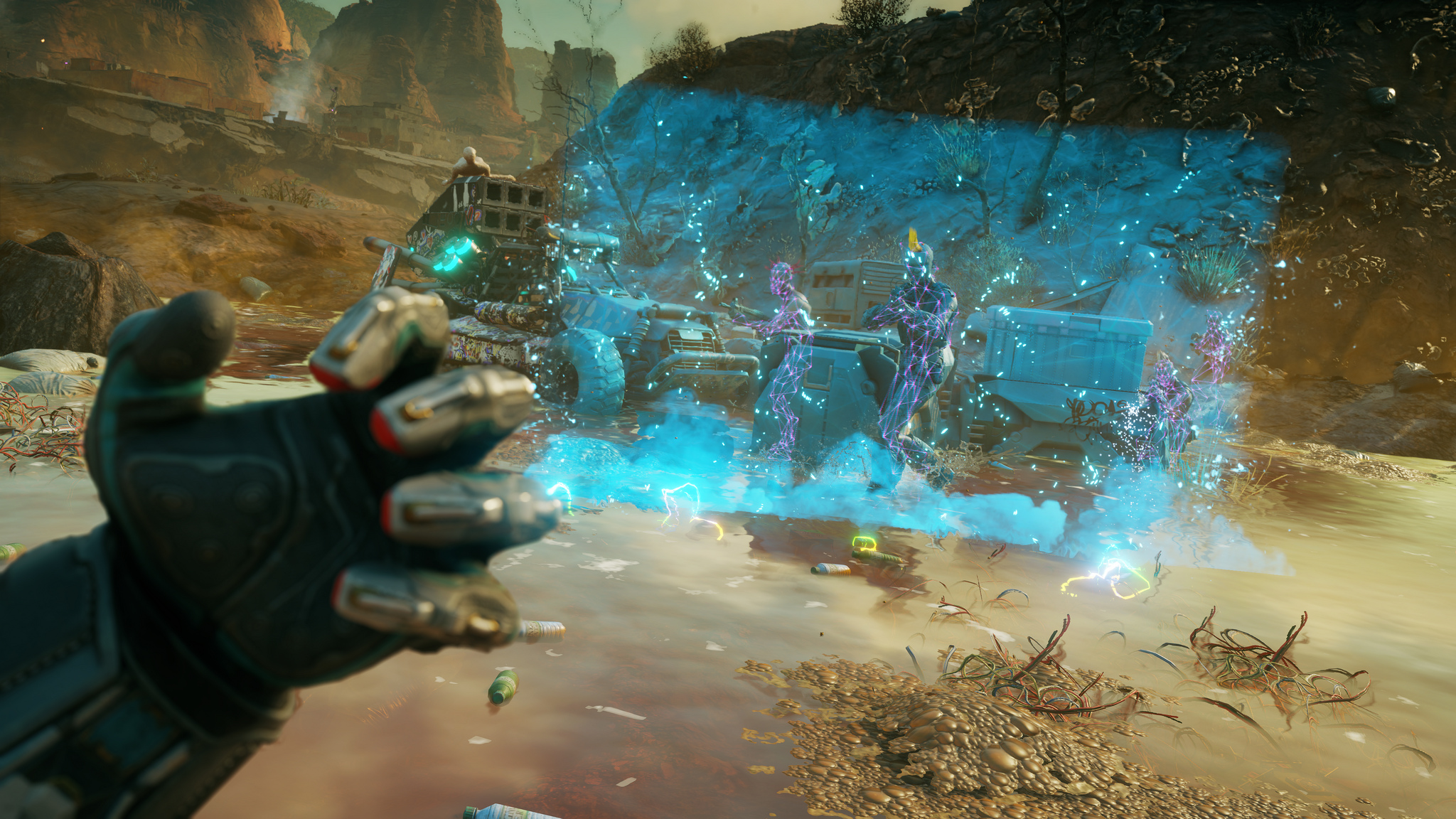 Toss out your own portable shield with Barrier. Block incoming fire and instantly kill pretty much anything that comes into contact with your Barrier. A well-timed Barrier and Vortex combo will drag your enemies directly into your killer shield.

Those are just some of the abilities you can pick up, but between those four, Rush, Dash, Grav-Jump, Overdrive and more, you’ve got the makings for a master of the battlefield.

All abilities in the game have numerous upgrades to help you become the ultimate badass. Even the Rush ability (an extra speed boost you can trigger while sprinting) has some sweet tricks, like double sprinting speed and temporary invisibility. There are over 70 upgrades for abilities alone, some of which offer a cooldown decrease or a damage increase, while others add entirely new functionality.

“Traversal is very free and versatile in the game, and it becomes even more so the more you upgrade,” explains Yan Knoop, Gameplay Programmer. “If you master things like Dash, Grav-Jump, Float, Vortex jumps, and Rush, you can really master any space and keep your enemies constantly dizzy.” 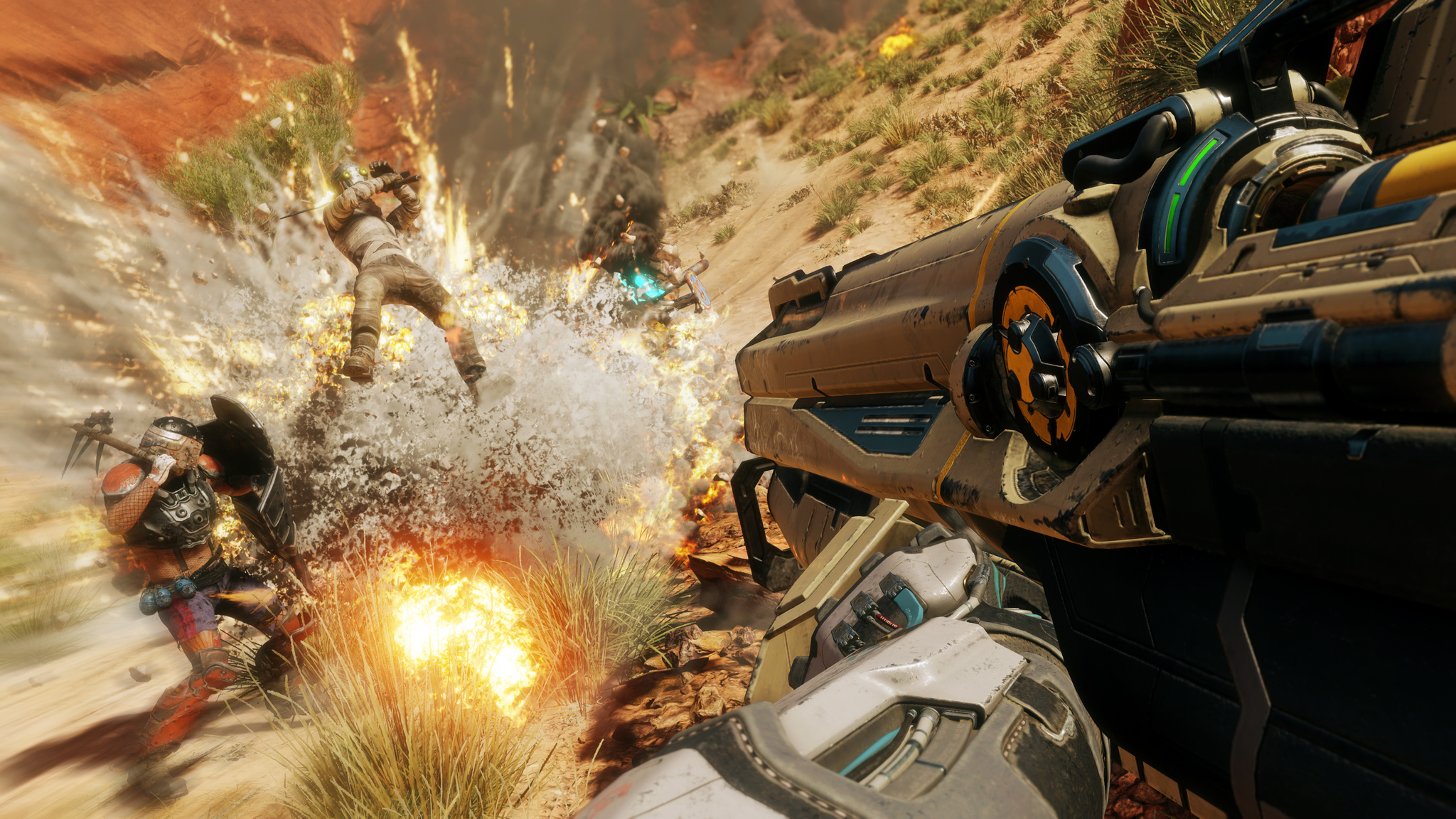 Some of the favourite upgrades from the combat team at Avalanche Studios include: Vortex’s anti-gravity field – an excellent way to control the battlefield and hold your enemies in the air, making them easy pickings; Grav-Jump’s Float upgrade, which allows you to hover in place while aiming down your weapon sights; and the Touch of Death upgrade to the Barrier, which turns enemies that pass through it into meat cubes.

“All abilities have some sort of basic usage that’s either for offensive, defensive or traversal purposes,” says Knoop. “But most also have additional functions that really unlock their true potential beyond its original purpose. This is where the abilities really shine and enable you to be extra creative.”

Put them all together and…

… You’ll unlock Overdrive. As you fight, you’ll fill up your Overdrive meter. When triggered, Overdrive pushes your weapons and abilities well beyond their limits and grants them unique attributes.

Some guns may gain a homing functionality, or the always hilarious ability to juggle enemies in the air with a barrage of bullets like a sick party trick. Also while in Overdrive, the cooldown for your abilities will be reduced. Combining all of your abilities in interesting ways fills your Overdrive meter faster, which could mean the difference between life and death.

“Overdrive represents the climax of a streak of aggressive, adrenaline-fueled play,” says Johansson. “It gives the player a nod that they are playing well and rewards them with a boost. It plays a central role in the core combat loop. In addition to the frenzy-like effects, you move faster, kill quicker and regenerate your health. If you learn how to master Overdrive, it can quickly become an integral part of combat, allowing you to take on harder enemy locations with less powerful equipment. On higher difficulties, playing in a way that charges Overdrive fast becomes a key to survival.”

Rage 2 is coming to PlayStation 4 on 14th May, 2019. Pre-order to receive the exclusive Cult of the Death God mission and don Nicholas Raine’s legendary armour and Settler Pistol. The Rage 2 Collector’s Edition is also available for pre-order. Get the full breakdown of all the included goodies here.

The post How Rage 2’s bone-crunching abilities turn you into a wasteland superhero appeared first on PlayStation.Blog.Europe.