It’s hard to believe that two whole years have passed since we released Horizon Zero Dawn. When the game launched on 28th February, I was attending GDC and counting down the minutes with a group of fellow Guerrillas and Shuhei Yoshida. Early feedback suggested that we had something special on our hands, but we never suspected that we’d still be receiving daily messages of appreciation from our players in 2019.

And yet, here we are. We recently crossed the 10 million copies sold worldwide; the idea that we were able to bring Aloy’s journey to so many players is astounding. We’ve been deeply moved by the enormous amount of fan creations you’ve posted online, as well as the heartfelt letters you’ve sent sharing your favourite moments from Aloy’s journey.

@SteppedOnABrick visited @Guerrilla today and brought some amazing gifts. Check out his LEGO engineering skills! I think the Shellwalker is my favorite, so much character, Marius worked on it for two months. Well … maybe the viscous Corruptor. Marius you rock!! pic.twitter.com/mh6ceWTRuf

To celebrate both milestones, I’d like to share something as well: a list of peculiar details from the development of Horizon Zero Dawn that you may not have heard about before. Some of the items on this list were born of necessity, others came about through serendipity – but each proved instrumental in shaping the game.

Prototyping on Horizon Zero Dawn’s gameplay elements began in 2010, at a time when most of the studio was still putting the finishing touches on Killzone 3. In the earliest prototypes, the team didn’t have an in-game model for Aloy because her character was still under development. Instead they used the model for Jammer, the Intruder pilot from Killzone 3.

It proved quite a challenge to find the right facial model for Aloy – until Conversation Director Jochen Willemsen came down with a bad case of the flu. While recovering at home he saw a movie starring Dutch actress Hannah Hoekstra on TV, and immediately knew he’d found the face of Aloy. Within minutes he was on the phone with the studio and the rest, as they say, is history.

The first machine that the development team designed and finished was the Thunderjaw, a fierce Tyrannosaur-like monstrosity. However, during the gameplay prototyping phase the Thunderjaw looked like a children’s toy made from brightly coloured plastic bricks. Each colour-coded ‘brick’ represented a different part of the machine that could be targeted or shot off. 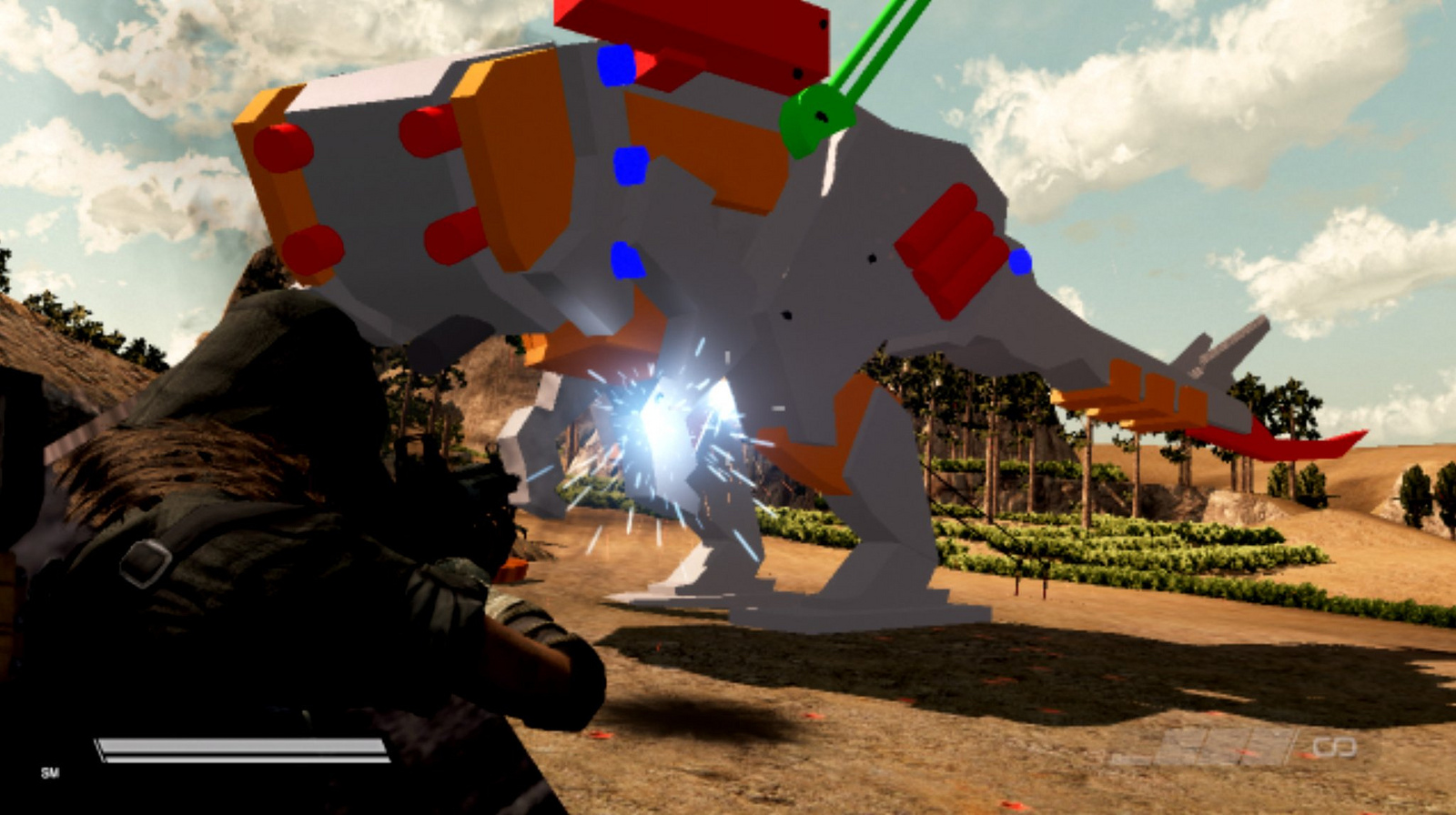 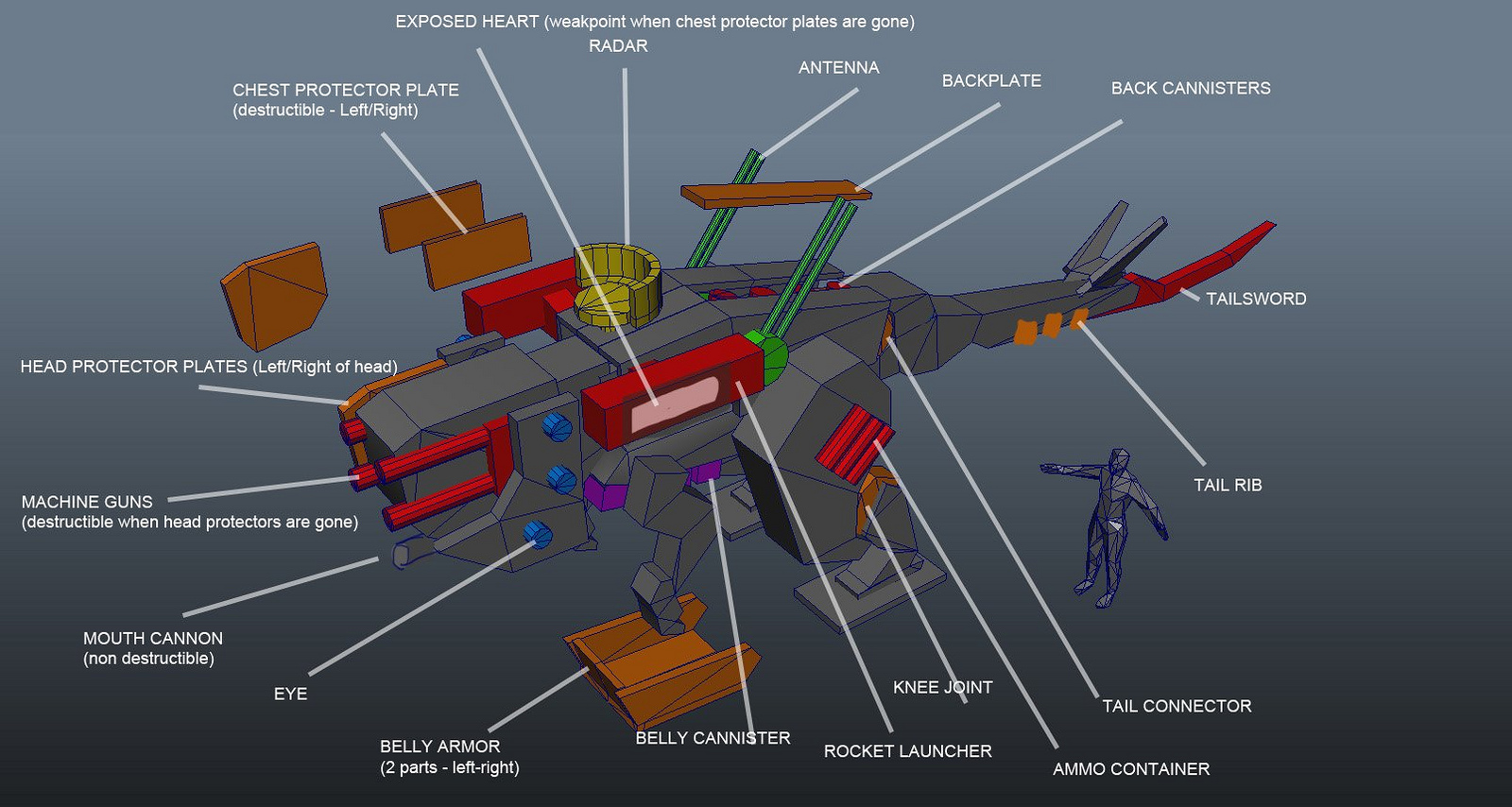 An early prototype machine ended up as a holographic ‘easter egg’ in one of our other games, Killzone Shadow Fall, which came out in 2013. Dubbed the Predator, the design for the prototype machine ultimately didn’t make it into Horizon Zero Dawn. However, many of its behavioural routines were used to create the devastating Sawtooth. 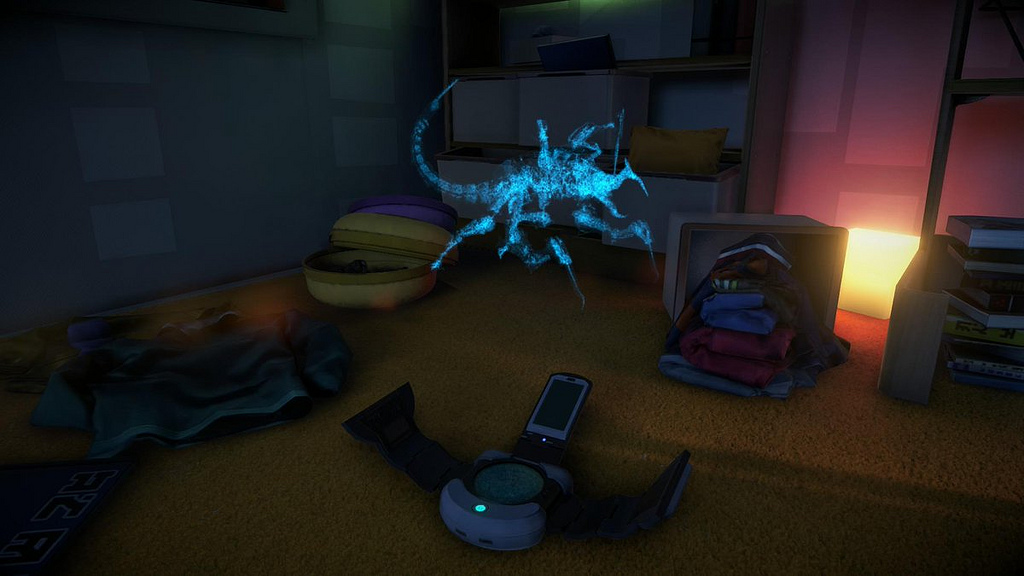 Some of the ‘walla’ (sound imitating the murmur of a crowd in the background) recorded by the Audio Team consists of Guerrilla developers speaking in gibberish. Although these recordings were intended as placeholder, they turned out so well that our Sound Designers decided to keep them in the final version of the game.

The lines – or rather, the cooing and gurgling – for baby Aloy were performed by an actual baby: the three-month old daughter of Guerrilla’s Music Supervisor/Senior Sound Designer Lucas van Tol. Her performance was captured over a period of the days from the comfort of home, where her father had set up a little recording area near her playpen. 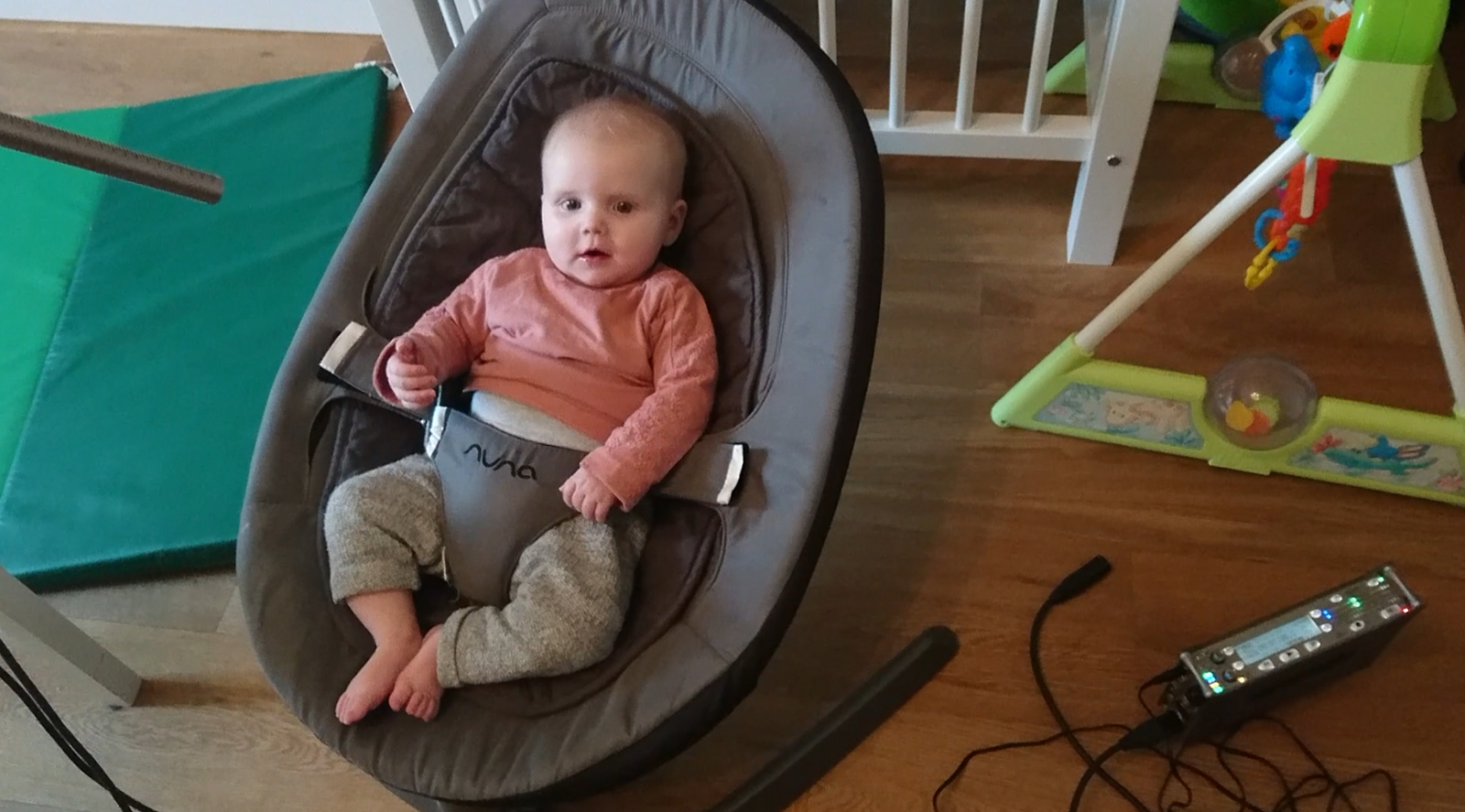 The composers for Horizon Zero Dawn were invited to the Guerrilla studio to ‘play’ on real-world facsimiles of the tribal instruments seen in the game. The resulting animations can be found at various points throughout the world of Horizon Zero Dawn, such as in the performance of the three-man band playing in Meridian City. 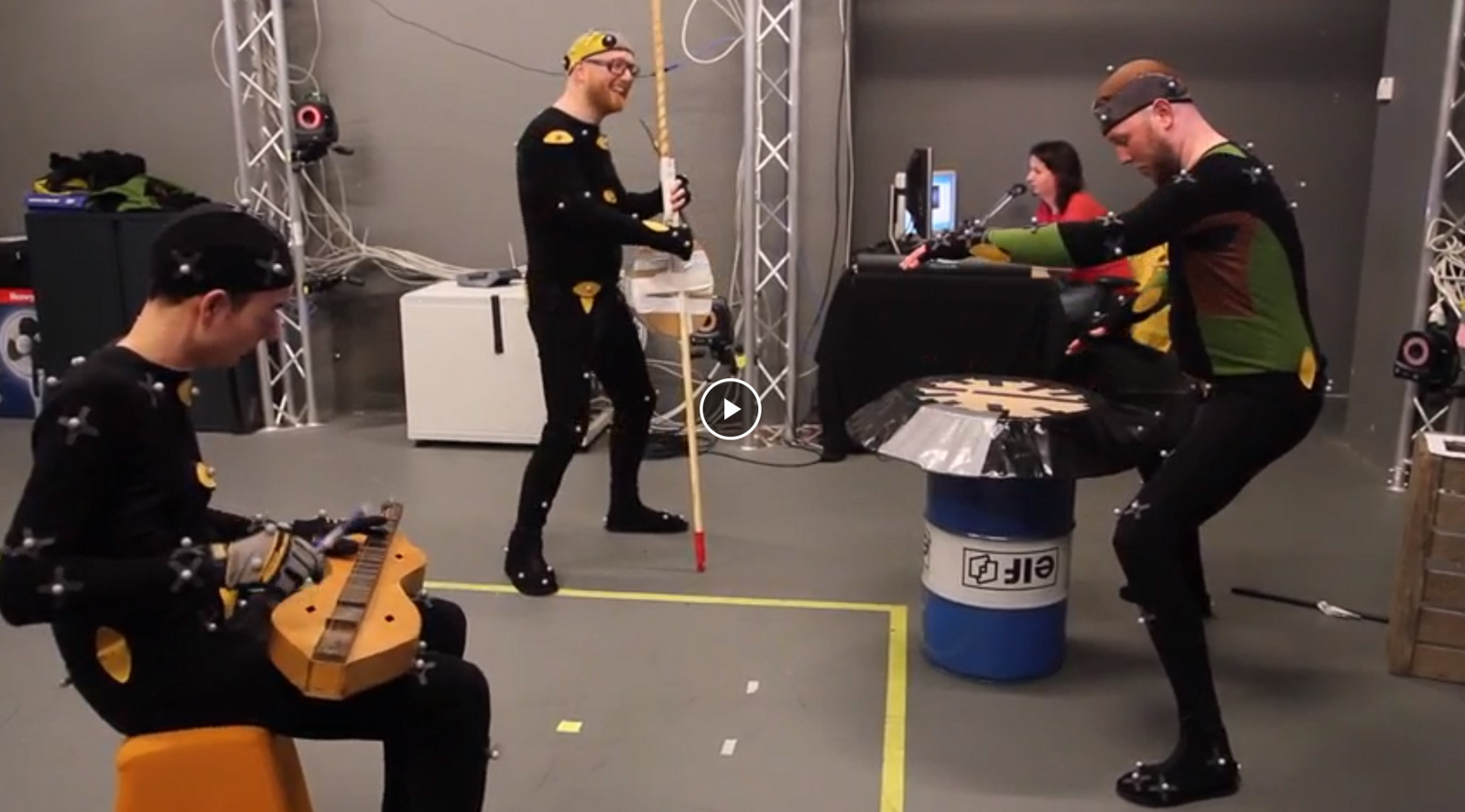 Every machine in Horizon Zero Dawn has hundreds of different sounds, from the creaking of mechanical limbs to the cries of alarm when it spots a threat. The sound designers mixed animal sounds together to give each machine a unique character; the sounds that the Watcher makes, for instance, contain Chihuahua barks to underscore its cute but ferocious nature.

Guerrilla’s Music Supervisor/Senior Sound Designer Lucas van Tol researched over 750 bird sounds. From these, only 30 made the cut to star in Horizon Zero Dawn; it was a comprehensive job to pick the birds that would naturally appear in the world of Horizon Zero Dawn. Not only does each bird sound differently based on the time of day, but weather also has an effect, as do biome location and height. 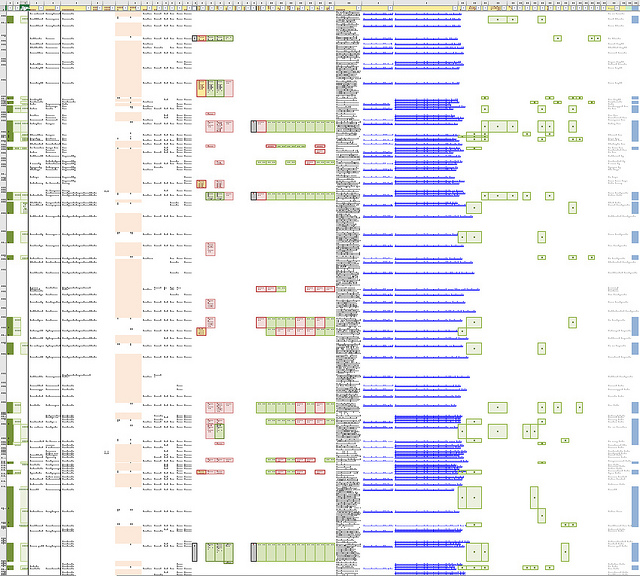 I hope you enjoyed these little details, and I hope you’ll continue to enjoy the world of Horizon Zero Dawn. On behalf of the entire Guerrilla studio here in Amsterdam, I want to thank you for making these last two years fly by.