Here’s how PS4 brawler Jump Force brought together heroes from Naruto, One Piece and more

Fans of anime and manga have long been awaiting the launch of
Jump Force, the fighting game which brings Weekly Shonen Jump heroes to life in an epic battle for the fate of our world. Combining iconic properties such as Naruto, Dragon Ball Z, One Piece, and more, Jump Force is a celebration of the unique characters and action-packed storylines that have enraptured fans of Weekly Shonen Jump for 50 years.

Jump Force launches worldwide on 15th February, but those of you who have pre-ordered the Ultimate Edition can start playing today! In light of the launch, producer Koji Nakajima shares his insights into the creation of this one-of-a-kind brawler.

How did the concept of the game come about?

Nakajima: Since we are celebrating the 50th anniversary of the Jump Magazine, we wanted to come up with a unique concept, something never done before. We came up with the idea of having the characters from those legendary IPs on Earth, in the real world.

I think every fan, back when they were young and reading manga, has thought about what it would look like if their favourite character was in the same world as them. That’s what I dreamt about at least.

We tried to realise that dream. For that we had to work on a scenario to explain why those characters are together in the real world, and I hope players will enjoy the story.

How did you come up with the look and feel and aesthetic for Jump Force?

Nakajima: With the variety of art design among the different series, it was a real challenge to find the perfect look and feel for the game.

We focused a lot on the eyes and the lighting on the skin. Those were two important factors to make the character as realistic as possible. I think we came up with a good balance! It took a while, and even between the game announcement at E3 and now, if you look carefully at the characters, they’ve changed a bit.

How did you approach balancing the various characters?

Nakajima: I did not want people to not play with a character they like just because he is supposed to be less powerful than another, so we decided to have a 3v3 tag system of gameplay.

This system allows users to compose a team of three characters and based on their fighting strategy, even a supposedly weak character can become important. Even though the tag system allows for more flexibility, we worked a lot to balance the game as much as possible so that each character can be strong. Then it all depends on the player skills, and the opponent’s strength!

What characters are you really excited to have in this game?

Nakajima: Most of the IPs we implemented in the game are series that I grew up with, so I am excited to play with all characters, but I think that users will be very happy to see that very recent series like Black Clover and My Hero Academia are represented in this game.

And I also hope to please the nostalgic fans with series like City Hunter or Fist of the North Star. We really tried to select the most loved IP by worldwide fans, not just Japanese fans, so I hope users will be happy with the final roster.

What are you most excited to share with fans about this game?

Nakajima: The feature I was the most excited to show to fans was the avatar customisation feature.

As a fan, I always wanted a game that would allow me to make my own hero with existing IPs characters’ clothing and elements. When we showed the avatar customisation feature in the office, everyone started to gather around the screen, and started to scream the design they wanted for their avatar.

Also, since we want players to enjoy the game for a long time, we really put a lot of efforts in this feature and the moves customisation, so I hope players will spend lot of time gathering all the clothing and accessories as well as the different skills. 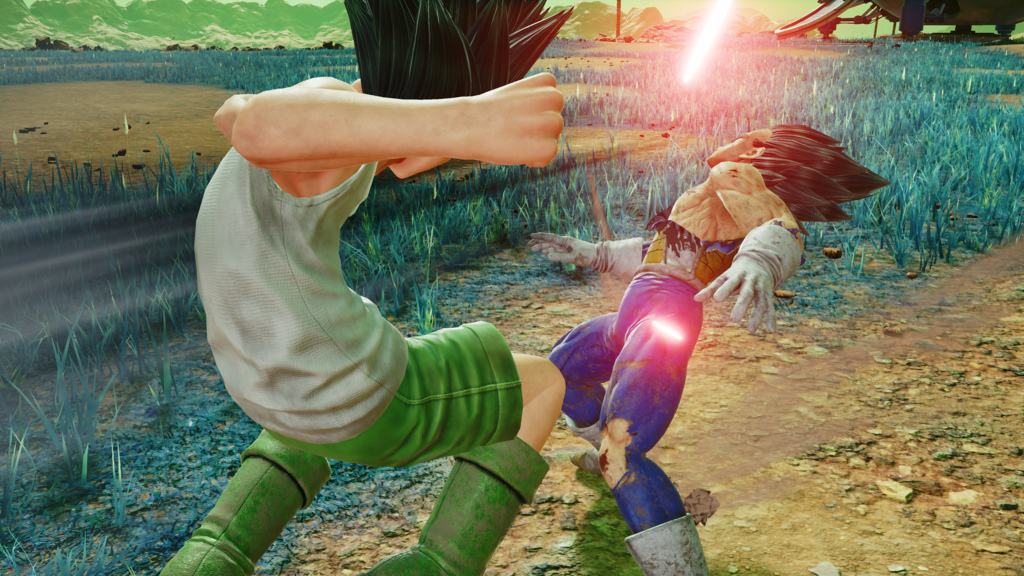 Why did you feel it was important to add damaged costumes and texture effects to the characters?

Nakajima: If you look at the E3 demo, the damage effects were not implemented yet, but at that time I already had in mind working on them.

So, I asked the development team to work on some more damage effects in the stage, and to add damage to the costumes. I am more than happy that I pushed for that because it plunges the player even more into this real world.

There are dynamic changes to the stages after specific attacks connect. How did you approach the multiple instances of stage design?

Nakajima: Here I was just imagining a super hero fight in a real city, and I could not imagine them staying at the same place without destroying anything around them.

For super heroes we need super fights, so we added the transition scenes. And on top of the spectacular effect it brings, it also increases the variety of environments to fight in!

Get ready to Unite to Fight! Create the ultimate fighter with the avatar customisation feature by mixing clothes and signature abilities from your favourite characters. Then, jump into battle alongside legendary heroes like Luffy, Naruto, Goku, Ichigo, Yugi and more, to defend our universe from evil.

Can’t wait until the 15th? There is still time to get early access! Pre-order the Ultimate Edition for PS4 today to begin playing immediately. See you on the battlefield!

The post Here’s how PS4 brawler Jump Force brought together heroes from Naruto, One Piece and more appeared first on PlayStation.Blog.Europe.