Celebrate roguelike ToeJam & Earl: Back in the Groove!’s PS4 launch with a series retrospective

Hey all you funky Earthlings out there! TODAY, the grooviest aliens are crash landing on Earth once again in ToeJam & Earl: Back in the Groove!

ToeJam and Earl have seen a lot of visual changes throughout their 28-year existence and four main series titles! The characters’ personalities have stayed the same (more or less!), but each iteration saw a new artist define their unique take on the duo’s super fresh looks. We wanted to share a blast from the past and give you a peek into how these Funkotronians have evolved!

So waaaaay back in 1991, the very first ToeJam and Earl game was release on the Sega Genesis. It was a radical top-down, cooperative, and randomly generated adventure game! The series co-creator, Greg Johnson, actually came up with the characters in a dream and soon after he sketched out the very first pictures of the iconic buddies. 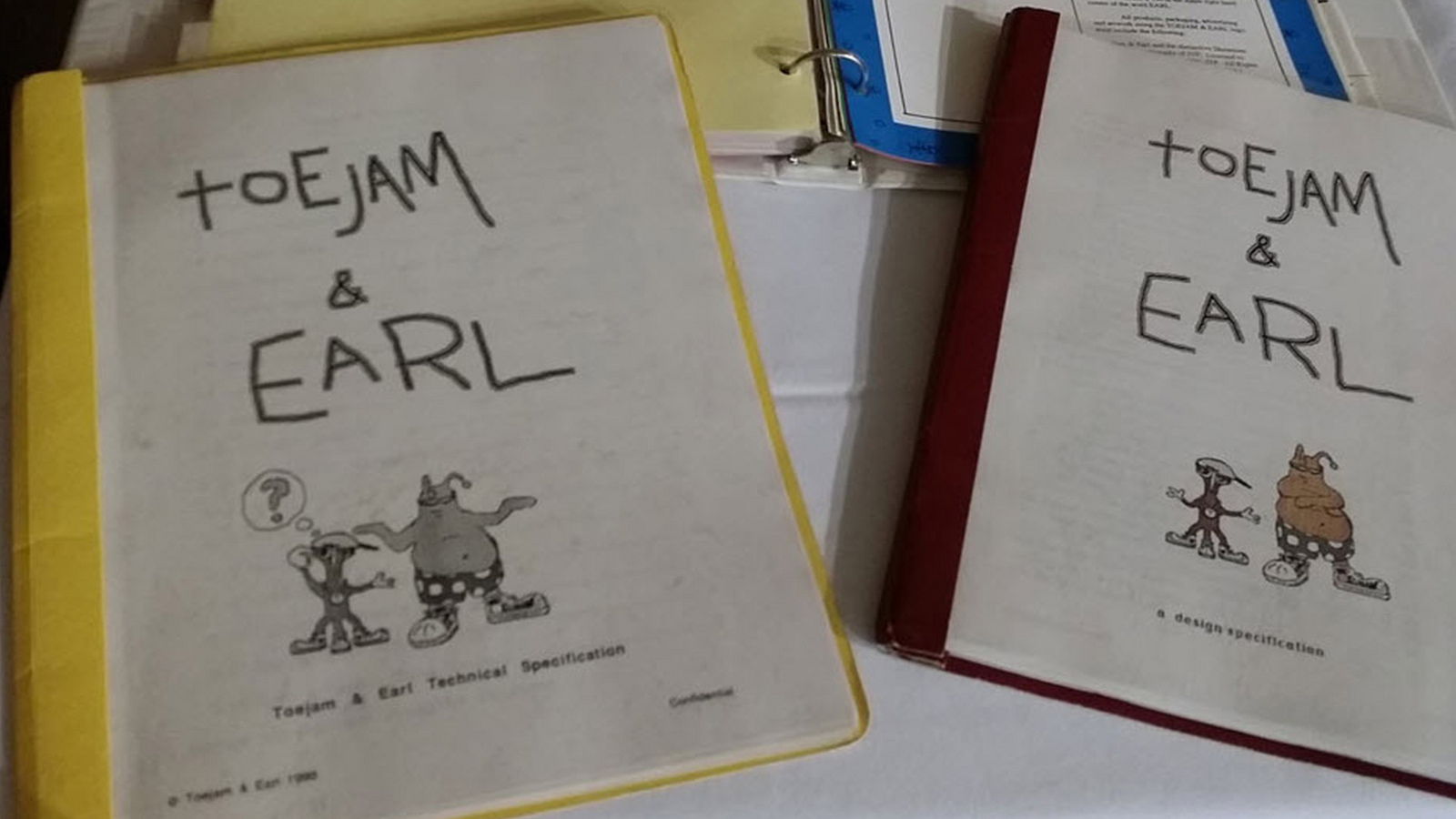 When it came time to create proper character designs, Greg enlisted the talents of Steve Purcell. Only a few years before, Purcell had created and designed another famous duo from the era, “Sam and Max”, so it was only fitting for him to give ToeJam & Earl their first professional digs. Greg then translated Purcells designs into the game’s 16-bit sprites and animation. 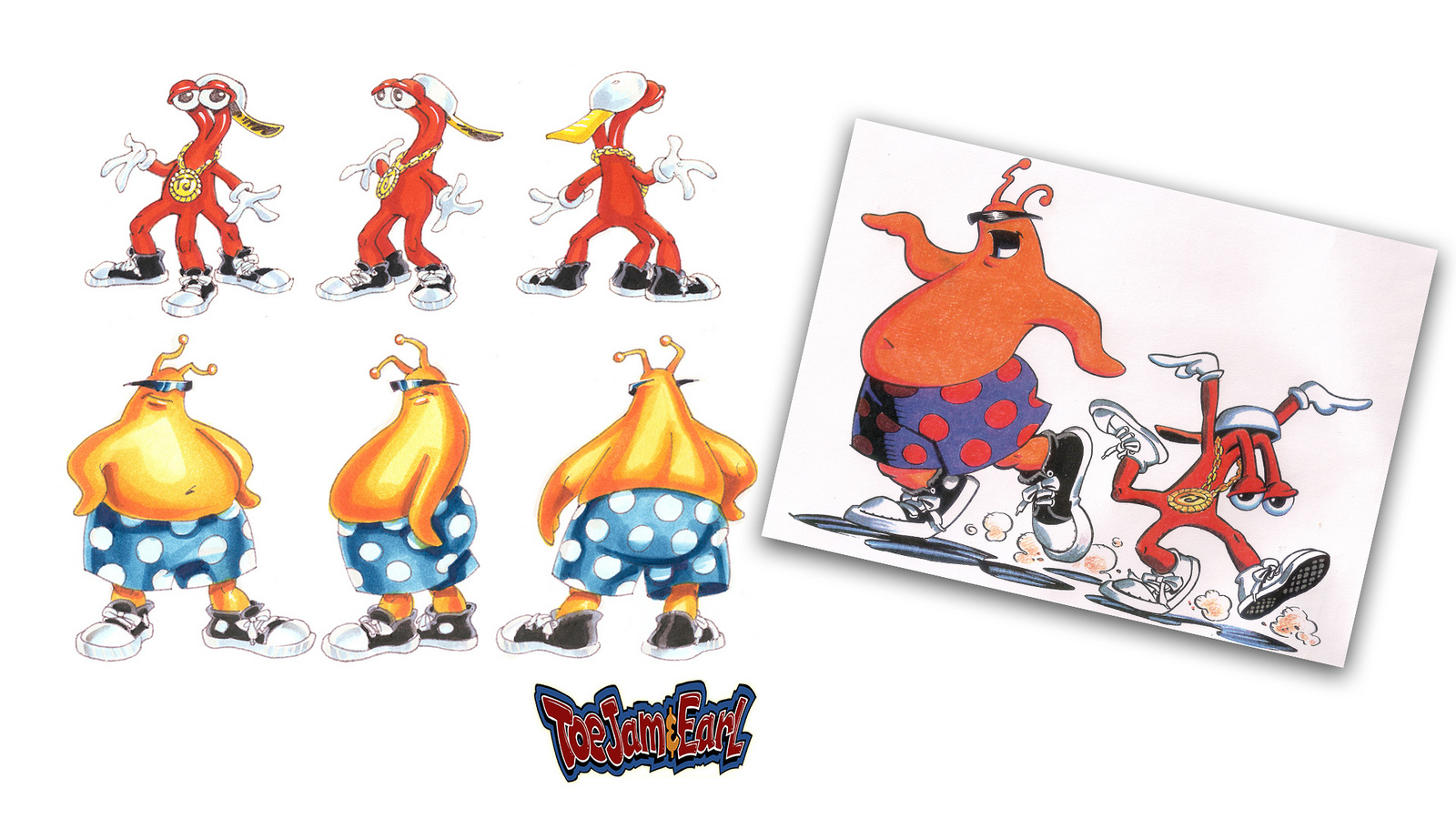 After the breakout success of Sonic the Hedgehog, Sega was itching to put similar games on it’s Genesis system. They approached Greg Johnson and his development partner, Mark Voorsanger, and requested they make another ToeJam and Earl game — But this time as a side-scroller! Greg and Mark got right to work and in 1993 they released ToeJam & Earl: Panic on Funokotron. 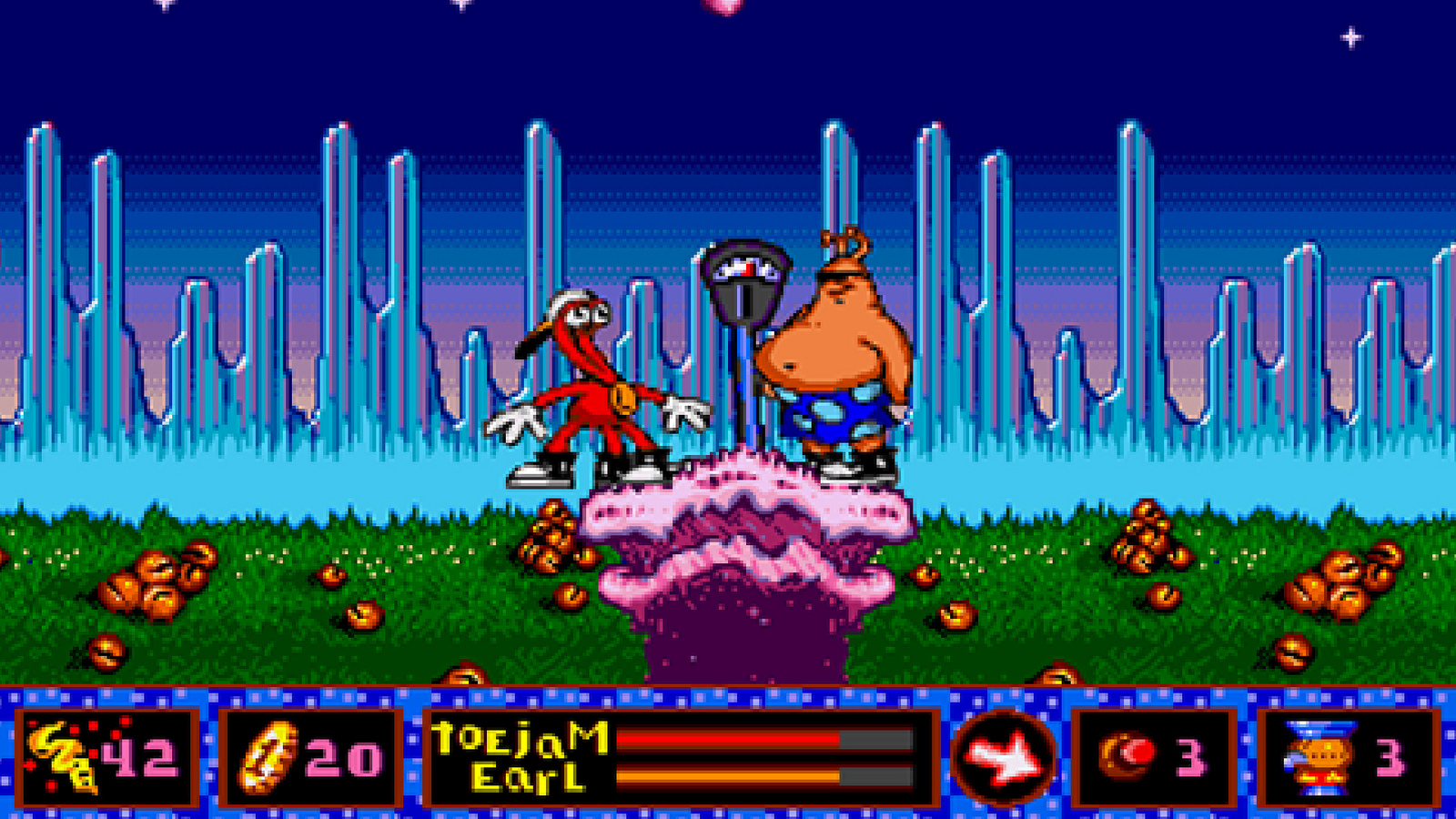 For this go-around, it was Kirk Henderson’s turn to the artistic plate, bringing with him a more animated cartoon feel to the funked out series. Since Panic on Funkotron was not in a top-down perspective like the first title, Kirk was able to bring much more detail to the character sprites than was possible the first time. 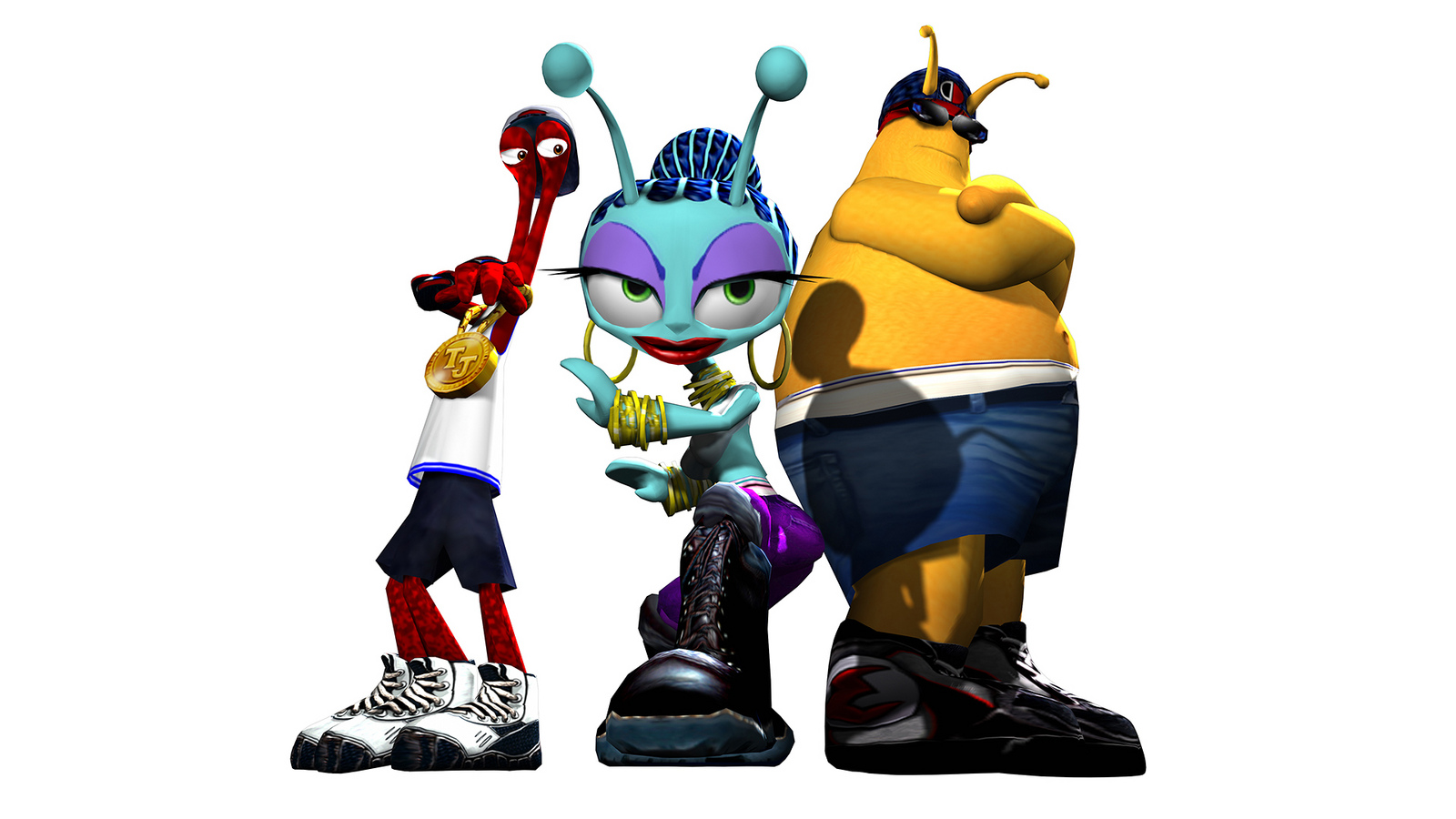 Skipping over the Sega CD, 32x, and Saturn, in 1999 Greg and Mark started development on a new ToeJam & Earl title for the Sega Dreamcast. After the less-than-optimal performance of the system, Sega decided the project would be better suited for a different platform.

This platform shift, according to Sega, required that this new ToeJam & Earl be “aged up” to match a more mature young adult audience.

I-Wei Huang, the lead animator and concept artist on ToeJam & Earl 3, was given the challenge of presenting ToeJam & Earl as grittier, more mature versions of the characters. He eventually landed on designs for the duo that reflected the rougher attitude and aesthetic of rap music in the early 2000s. ToeJam & Earl 3: Mission to Earth was released in 2002.

After TJ&E3 was released, Greg Johnson split off to form his own independent game company, Humanature Studios. He continued to shop around the ToeJam and Earl property for a number of years while making other games, but the lukewarm reception of TJE3 made it hard for a publisher to hop on board.

In the late 2000s, Johnson and his friend, Jeff Kreis, started on a new project; a personality test/ adventure game hybrid. This project would ultimately become the charming Playstation exclusive, Doki-Doki Universe (2013). 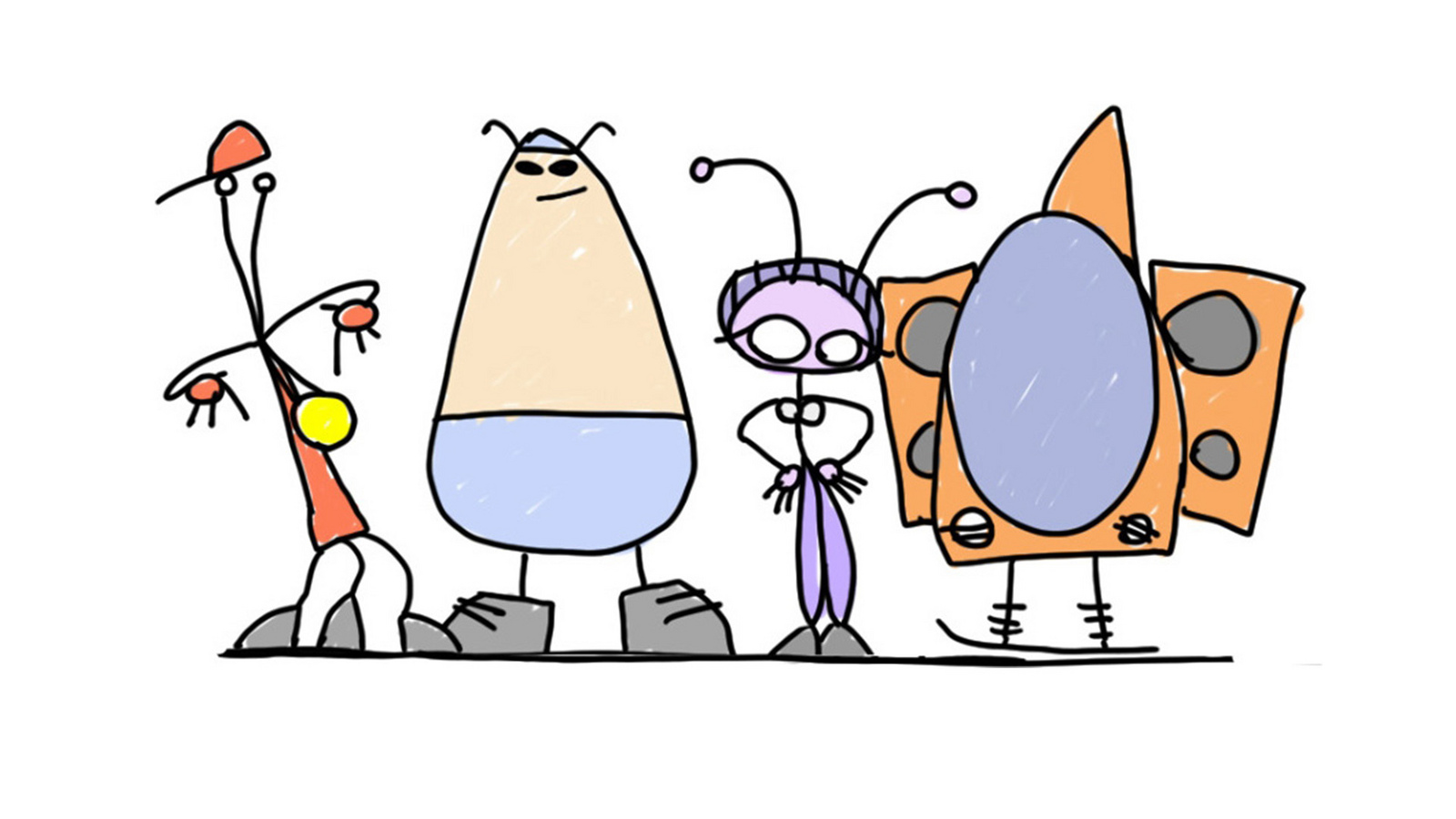 The visual direction for Doki-Doki Universe was based on doodles I-Wei Huang would make in the margins of his notepads while at Humanature Studios. Greg and his team got as far as creating a whole ToeJam & Earl level in this style for Doki-Doki Universe, characters and all, before ultimately cutting the idea from the game. A very different but interesting look for these Funkotronians!

ToeJam & Earl: Back in the Groove!

In early 2014, with the success developers had been having funding their games through kickstarter, Greg Johnson and Jeff Kreis started on a prototype in the hopes of crowdfunding a new ToeJam & Earl! 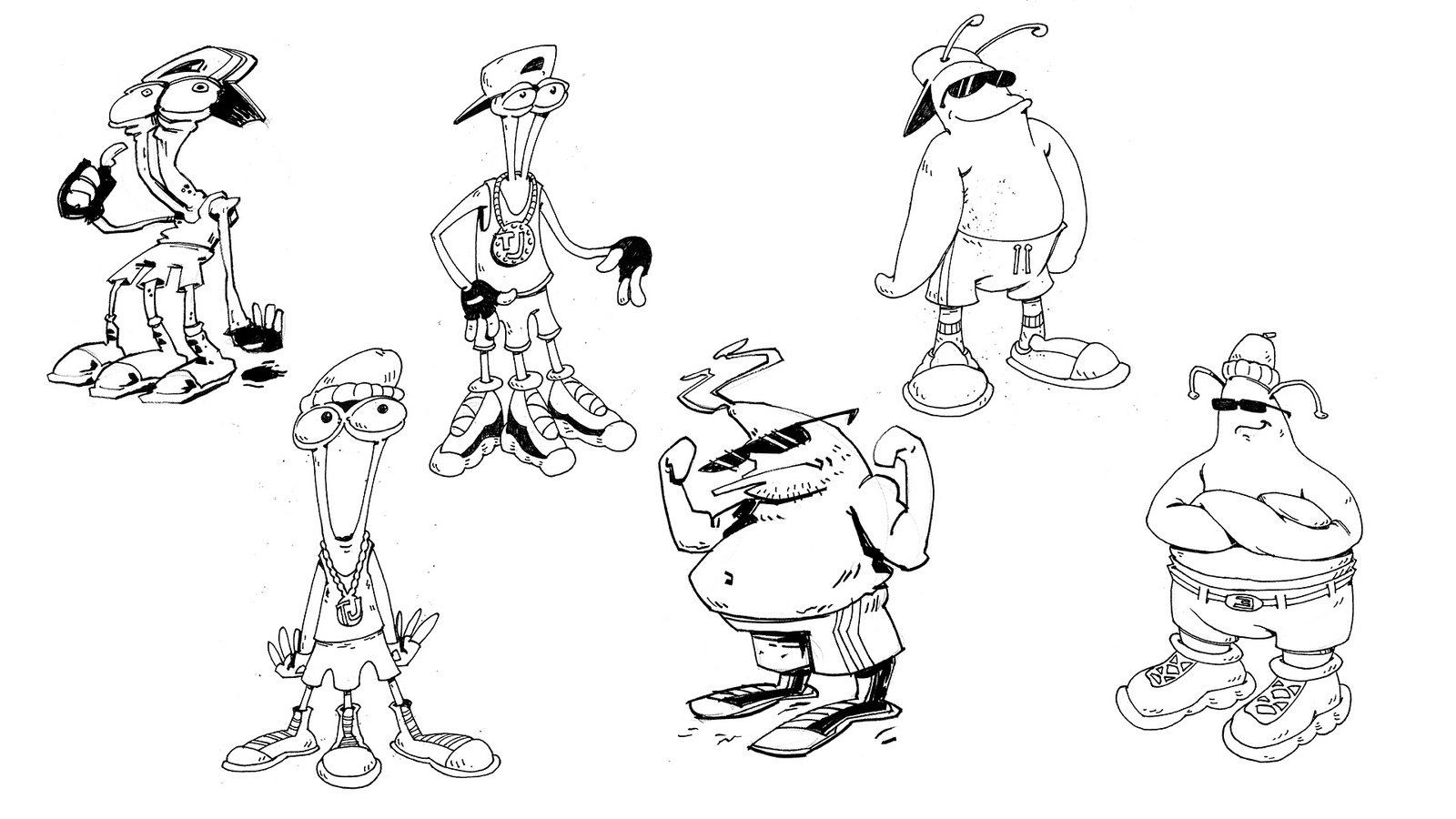 They recruited indie comic artist Nathan Shorts (that’s me!) to lead both the visual direction of the new titles, as well as to organize the crowdfunding charge! In spring 2015, the group succeeded in raising their initial funding goal and full development started on ToeJam & Earl: Back in the Groove! — the first ToeJam & Earl title in 13 years.

With Greg wanting Back in the Groove! to be the quintessential version of the ToeJam & Earl line up, I decided on the challenging task of capturing the “ideal memory” of the ToeJam & Earl era (the early ’90s) in visual form. Not only did he want to make original fans feel at home, he wanted new players to feel like they’d been sent back in time! He set out to make Back in the Groove!’s visuals seem like Nicktoons, comics, and video game advertising all rolled up into one playable package! 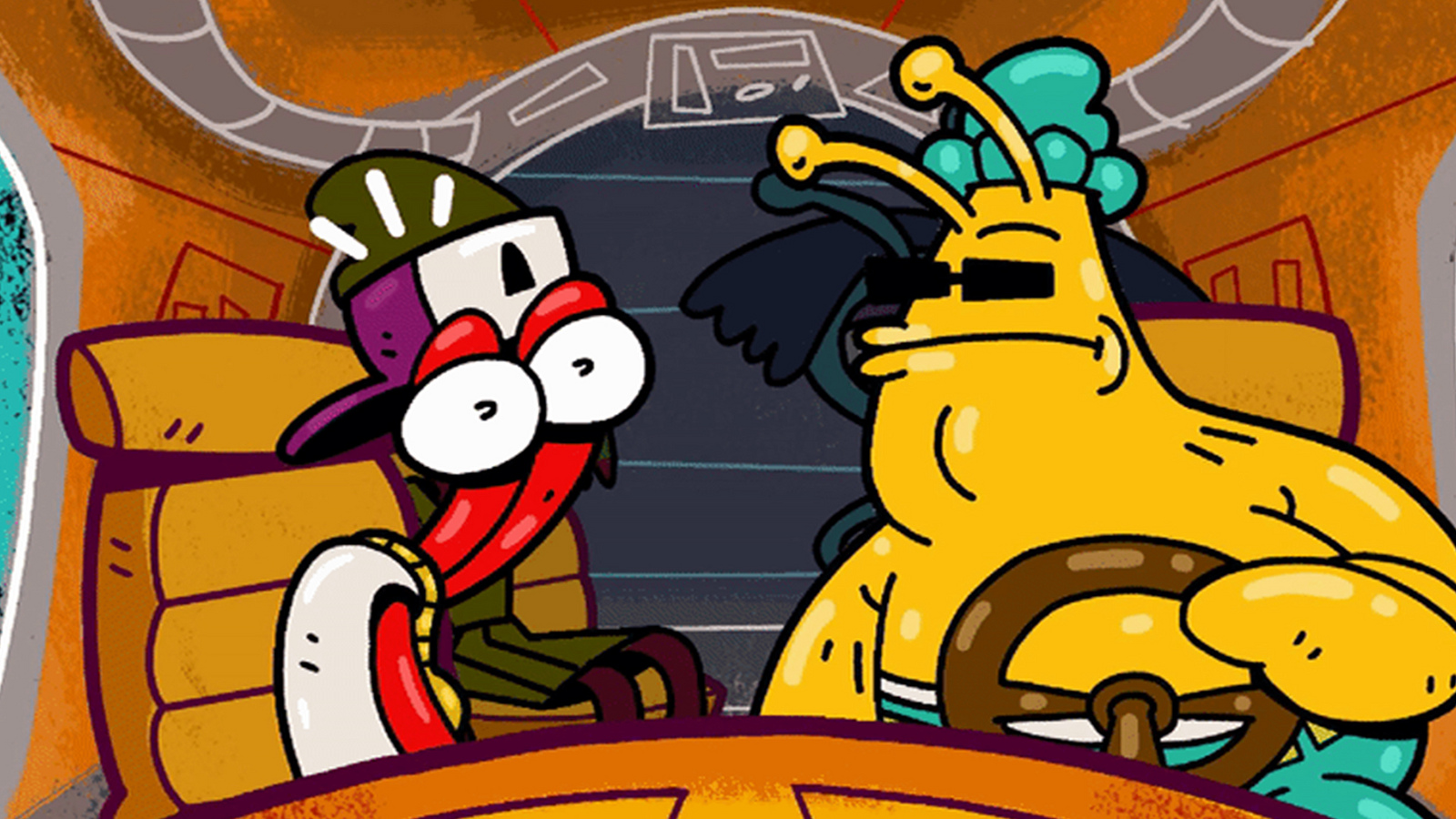 The ToeJam and Earl characters went through a number of early iterations. The most important thing was that TJ and Big E felt like themselves, but updated at the same time. Greg and I ultimately landed on designs they both were happy with and the rest started falling into place from there.

Now, ToeJam & Earl: Back in the Groove! is finally here for ToeJam and Earl to show off their brand new look! The team is excited to see what the fans think and hopefully this won’t be the last time we see these wacky Funkotronians!

The post Celebrate roguelike ToeJam & Earl: Back in the Groove!’s PS4 launch with a series retrospective appeared first on PlayStation.Blog.Europe.