It’s finally time to suit up and start your adventure in the beautiful but dangerous world of Anthem. But before you do, we’d like to go over some of the important elements of the game that will help you get a head start on your fellow Freelancers.

Your Javelin is the key to both combat and movement in Anthem. Its mobility and firepower give you the ability to soar through the air, dive into the murky depths, and take on pretty much anything this world can throw at you. The minute you climb into a javelin you feel unstoppable.

So, how soon can you get your hands on a javelin of your very own? You’ll unlock your first at level 2, your second at level 8, your third at level 16, and your fourth at level 26. There are four to choose from, each with its own unique abilities, strengths, and weaknesses.

If you’re looking for the perfect javelin for almost any playstyle, you’ll want to start with the Ranger. It’s versatile, well-balanced, and great for both close and long-range combat.

Like to get into (and out of) a fight before the enemy even knows what hit them? The Interceptor is the right javelin for you. It’s powerful, agile, and a master of close combat.

If “tank” is your playstyle of choice, this mammoth war machine is calling your name. The Colossus is big, heavily armored, and the only javelin capable of wielding Heavy Weapons.

The raw power of a Storm is something to behold. This elegant long-range specialist is a master of the elements with incredible fire, ice, and lightning attacks.

You can both customise and personalise your fleet of javelins to suit your needs and style. We’ll cover the details on that in the next two sections.

Now that you’ve got your javelin, it’s time to add gear and weapons, so head to the Forge, your in-game customisation and personalization hub. You can access the Forge via either Fort Tarsis or the Launch Bay; once at one of those locations, select the “Loadout” tab.

Let’s start with gear, which can modify aspects of your javelin, like optimizing attack combos, lowering cool-down times, increasing a weapon’s effectiveness, and more.

In terms of weapons, you’ll start with only one slot, but as you level up you’ll unlock a second. As soon as it’s unlocked try to select complementary weapons and remember to switch between them in the field by holding the reload button (Square on your controller). This can come in very handy when situations on the ground change, like when an immediate need to snipe a long-distance enemy arises.

You can also personalise your javelin’s look in the Forge by selecting the “Appearance” tab. Note that all the options you’ll find here will only affect how your javelin looks; they’re entirely cosmetic. You can choose from a huge selection, including paint colours, armour wear state, unique patterns you can apply called vinyls, and animations. With so many options available, you may be surprised at how much time you’ll spend in the Forge getting the exact look you want. 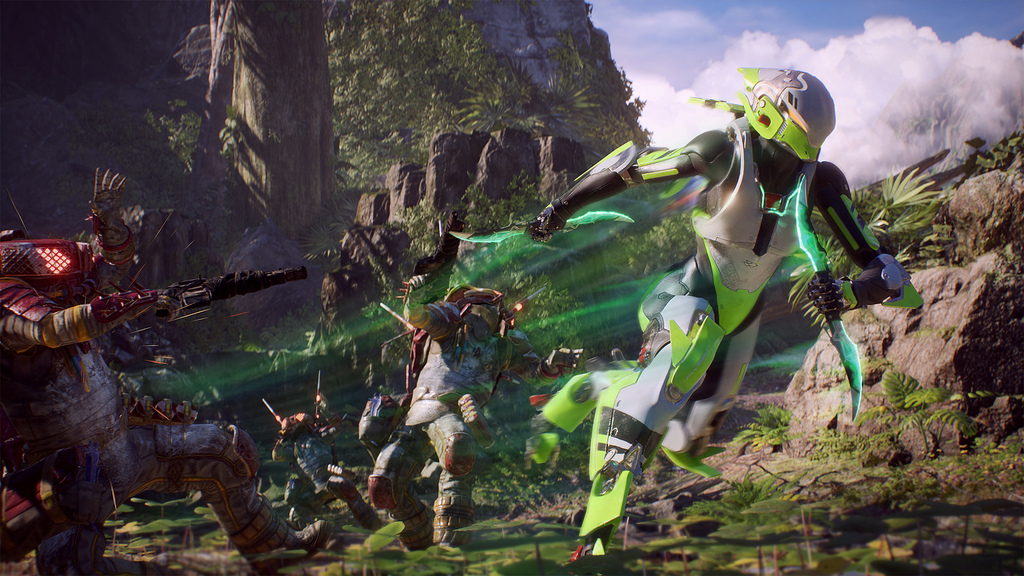 You’re armed and your javelin looks amazing, now it’s time to head out into the world for some serious adventure. Whether you’re taking on a dangerous Stronghold (high-level dungeons you’ll need a squad of Freelancers to complete) or just exploring in Freeplay (roaming freely around to collect crafting materials or look for a random fight) you’ll need to understand how to get around.

Your javelin gives you the ability to travel through the vertical spaces of your world, and there is nothing quite like flying high above the landscape just taking it all in. How do you get airborne? On your controller click the left stick to soar into the air and control your movement. Want to hover above an area? Click the right stick while airborne.

While flying is one of the most incredible experiences in the game, you won’t be able to do it forever. Your javelin will overheat eventually and re-introduce you to the concept of gravity rather abruptly. You can deal with this by pressing the X button to come in for a landing, or by looking for a nearby body of water. Taking a quick dip in a lake or waterfall will give you more time in the air.

There’s lots more to discover in Anthem – mysteries to uncover, environments to explore, dangers to face – so choose your javelin, suit up, and become the hero this world so desperately needs. Unleash your power on PS4 today.